This part of my site is a compilation of photos and some history that I have collected over the years.
If you have some you would like to add to this collection send them to me and I will add them
to the collection.

My goal here is to create a good resource for people to be able to date their Ukuleles and compare them
with others out there. Click on the (Vintage ukuleles) button and use the drop down menu for links to the different brands and photos of vintage ukuleles.  Send me a message from the Contact link if you have any questions about the site or Ukuleles, or to add photos of your favorites.
Keep on playing 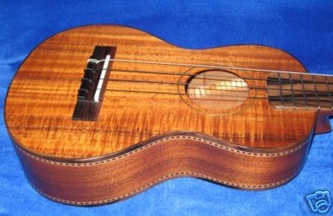 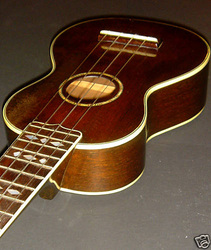 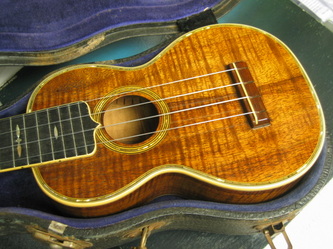 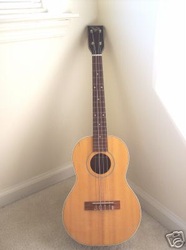 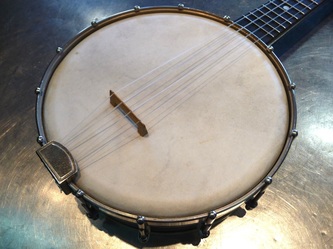 The ukulele is commonly associated with music from Hawaii, where the name roughly translates as "jumping flea", and was developed there in the 1880s as a combination of the Madeiran braguinha and rajao. A braguinha is an instrument similar to a cavaquinho, built in the city of Braga and named after it; the Portuguese cavaquinho is usually tuned in D-G-B-D, a G-major chord. The Madeira rajao is tuned D-G-C-E-A. The D and G strings are both re-entrant, i.e., tuned an octave higher than expected in the normal low-to-high course of strings. The GCEA strings of the rajao are the source of the re-entrant tuning of the modern ukulele[1].

Some of the most valuable ukuleles, which may run into the thousands of dollars in price, are made from koa (Acacia koa), a local wood known for its fine tone and attractive color and figure.

The ukulele was popularized for a stateside audience[2] during the Panama Pacific International Exposition, held for most of 1915 in San Francisco, at which the Hawaiian Pavilion featured a guitar and ukulele ensemble, George E. K. Awai and his Royal Hawaiian Quartette, along with ukulele maker and player Jonah Kumalae. The popularity of the ensemble with visitors launched a fad for Hawaiian-themed songs among Tin Pan Alley songwriters. The ensemble also introduced both the lap steel guitar and the ukulele into U.S. mainland popular music, where it was taken up by vaudeville performers such as Roy Smeck and Cliff "Ukulele Ike" Edwards. The ukulele became an icon of the Jazz Age as this highly portable and relatively inexpensive instrument also proved popular with amateur players throughout the 1920s, as is evidenced by the introduction of uke chord tablature into the published sheet music for popular songs of the time (a role that would eventually be supplanted by the guitar). A number of mainland-based instrument manufacturers, among them Regal, Harmony, and Martin, added ukulele, banjolele, and tiple lines to their production to take advantage of the demand.